Paulo Dybala’s solitary goal on Tuesday night was enough to give Juventus a 1-0 win over Manchester United in their UEFA Champions League clash at Old Trafford. 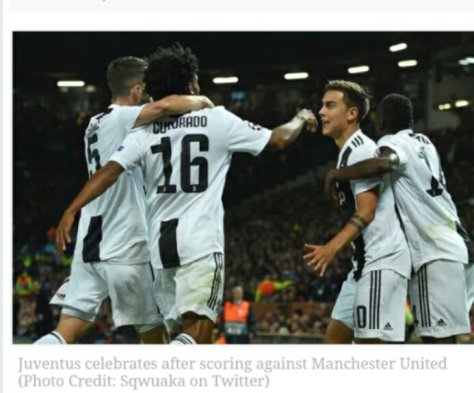 Cristiano Ronaldo dominated the pre-match headlines on his latest return to his former club, but it was Dybala who got the only goal of the game as Juve made it three wins from three in the group.

Paul Pogba did hit the post in the final 15 minutes against his former club, but that was a rare attempt from United who were largely flat-footed on Tuesday.

Despite the loss, United are still in good stead to qualify for the knockout phase as they are second on the log with four points while Valencia and Young Boys are third and fourth respectively.

In the other games played on Tuesday, Manchester City romped to a 3-0 away win over Shakhtar Donetsk while Roma also recorded the same scoreline at home against CSKA Moscow.

Elsewhere, there was some relief for Real Madrid as they managed a 2-1 win over Viktoria Plzen.

Bayern Munich also squeezed out a 2-0 away over AEK Athens while there was goals galore in Germany where Hoffenheim and Lyon played out a thrilling 3-3 draw.