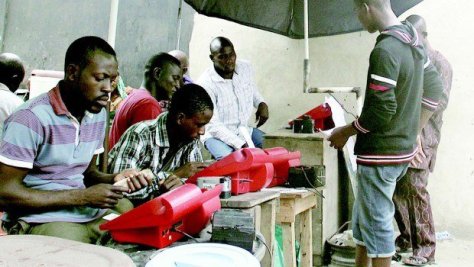 I see myself as a pretty smart guy, but there is one thing I have never been able to figure out. That one thing is the intricacies of the lottery game called ‘Baba Ijebu’. What baffles me the most about the game is how the so called uneducated men and women sit or rather stand in front of a wooden shack (they never use a good shop, and I have no idea why because I feel they should be millionaires since they say it’s very lucrative) where the game is being played and delicately perform staggering feats of calculation. They would mention so many numbers and be like ‘Ele ma wole’ (this one go enter). If only they paid close attention to mathematics while at school, I guess Nigeria could have been a Nation with a plethora of world class mathematicians.

Where did I enter this madness? Yesterday, yes, just yesterday, a close friend of mine called me from his place of work, and told me that he was about to send some numbers to me, and that I should go and place a bet on them because he could not leave work to do so. Being naturally paranoid and difficult, I said no at first because I do not gamble and secondly because I’ve known this dude for seven years and we’ve never done something like this. But after a long conversation on the phone, I agreed to his harebrained scheme because he declared his coworker allegedly saw some numbers in his dream, and also, winning was certain. So, I reluctantly decided to sacrifice my DEAR HUNDRED NAIRA note.

‘Walahi, if this game no enter, you go refund me,’ I said. ‘Shame no gree me go vendor play am’ so I sent someone else to place the bet for me. As fate would have it, the person also did not understand the intricacies of the game.

This evening, I received a call and my friend said ‘Omo, two numbers enter o, we don chop 4k,’ I was like wow, let’s go and cash out and my guy jokingly said he’d refund the money I used to play it. ‘Ogbeni, no play rough play with me,’ I said, narrowing my eyes dangerously.

We cashed out, split the money and immediately, another man came to meet us saying ‘my dear brothers, I see numbers for dream’.

Chai!! Nigerians
Lol, that one na for him pocket, “money wey we just win u want make we invest am again. We no do, thank you”