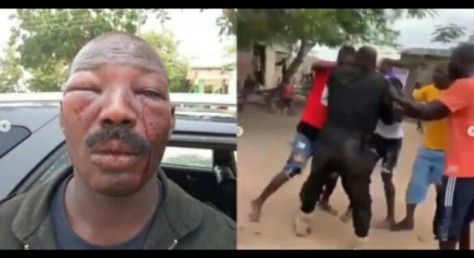 In a viral video sighted by GhanaCelebrities.com on social media, a police officer identified as Sergeant Mahanadi of the SWAT Unit of Ghana Police Service was seen been brutally assaulted by angry residents of Amasaman, a suburb in Accra.

What led to this brutal assault on the police officer is still not known but from the video, he seems to have done something to piss off the residents.

The law will definitely deal with these residents of Amasaman just as the Trotro driver and mate after they assaulted the police officer for doing his job.