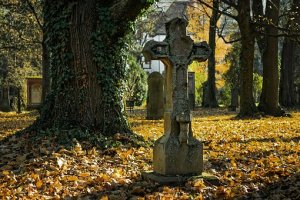 I was so desperate I took a job attending funerals. It’s not as goulash as it sounds. I would open and lock up the church after the funeral. In between, the minister would officiate and comfort the family, but he couldn’t be expected to arrive a couple of hours before the funeral and stay an hour or two after. I was usually there five hours. The pay was decent enough.

The saying is that dead men tell no tales, but they do; and those who attend their funerals tell even more. The departed and the attendees tell everything. His obituary will say he was a faithful husband, but why is his girlfriend sitting on the aisle across from the wife? If he was such a loving father why didn’t his oldest daughter show up, and why doesn’t someone mention her name? If he was such a good husband, why is his wife nearly dancing a jig? I think she killed him. She has the look of someone who has been relived of a burden.

Family and friends, they try to put the best face on the corpse, but I can see it – he, or she, lies right there for all to see; to examine if his illness or age wore away his strength and vitality like his weight. Gaunt faces; sunken eyes; drawn lips, even before they were sown together. Old wrinkled fingers that squeezed pennies or let opportunities slip away.

People want to talk at funerals, especially to someone who doesn’t know. That way they can share it as news to a stranger instead of the gossip it would be to a family member or friend; and if you judge, so what? You’re just some guy waiting for the punch to give out so that the family will go home, never to be seen again. One person tells you the departed’s every accomplishment, but, sooner or later, someone else tells you his faults – maybe not directly, but they will tell. The particulars about the dead are like advertisements for houses, there is far more there than is revealed and the truth is concealed between the lines. She loved children because she had none, and that was because she couldn’t conceive; he riled against abortions because the one he forced a girlfriend to have so long ago still haunted him; he gave generously to good causes but cheated his partner and stole the business; she loved life, but committed suicide; he will be buried beside a wife he was forced to have instead of the man he loved. They will share a headstone the size of a small northern state: beloved wife; beloved husband, it says.

I’m afraid for my own funeral. Not because I’ll be dead, but because all my secrets will be revealed to the stranger sitting in the back of the room waiting to wash out the punch bowl. Who does he think he is?